When it comes to period properties, there are two main types of window: Sash windows and casement windows. But what is the difference between a sash window and a casement window, and why have their designs and popularity changed over the years?

Sash windows consist of two glazed panels, or ‘sashes’ that slide vertically with the help of weights and pulleys. One of the main advantages of sash windows over casement windows is that because the windows slide up and down rather than opening outwards, they are more protected from the elements and therefore likely to last longer than casement windows in poor weather conditions. 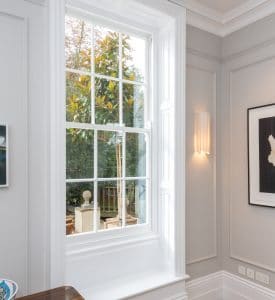 Sash windows became popular in the Georgian era and remained popular until the Edwardian era. Their classic proportions, based on squares and the ‘Golden Ratio’ – a ratio found in nature and used to create aesthetically pleasing design since Ancient Greece – meant the windows were a key part of Georgian architecture, with its emphasis on uniform proportions and understated elegance.

Because glass was hand blown in the Georgian era, only small panes of glass could be manufactured. Classic Georgian sash window design therefore compromised two moving sashes each in a grid of 6 individual panes of glass, joined together with slim timber glazing bars.

In the Victorian and Edwardian eras, architecture took advantage of plate glass manufacturing which meant larger panes could be made. Sash windows could therefore be made with a single pane of glass, without the need for glazing bars. These larger panes of glass were heavier, so frames became thicker and horns were added to the bottom of the top sash to hold the extra weight.

Bay windows also became popular after 1894, when an amendment to the Building Act meant that windows didn’t need to be flush with the exterior wall.

Edwardian sash windows often feature glazing bars more for decoration rather than function – for example glazing bars on the upper sash only and a single pane of glass on the lower sash to allow more light into the room. 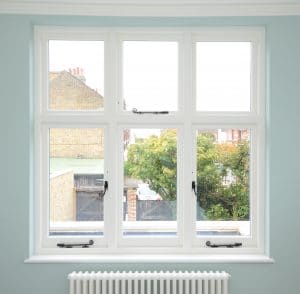 Casement windows are hinged windows, usually side hung, but sometimes top hung. They started to gain popularity in the Edwardian era, and became the window of choice in the 1920s and 1930s onwards. They fell out of fashion in the Georgian era, when the sash window was the window of choice.

Some of the very oldest windows still surviving today are casement windows. In Tudor times when glazed windows first started to emerge, casement style windows were made by fusing together a series of small panes of glass with lead.

In the late Victorian/ early Edwardian eras, the Tudor style of casement window came back into fashion as part of the Arts and Craft movement which favoured traditional craftsmanship and more intricate, delicate decoration. Even though larger panes of glass could be manufactured by this time, which made leading or glazing bars unnecessary, they were often still used for decorative effect.

Are you looking to replace or repair your timber sash windows or casement windows?

At Timbawood we specialise in replicating your existing period windows, with every window handmade to order in our London factory.

Not only do we sensitively replicate the existing period design of your windows down to the finest details, we also include understated features that upgrade the performance of your windows, including slimline double glazing that looks just like single glazing, specialist glazing options such as acoustic glass for improved sound insulation, and multi-point locking on casement windows to provide additional security.

We can also replace the sashes or casements and fit them to the existing frames, to retain as much of the original architecture as possible while improving the performance of the window.

To find out more about the options available, please get in touch to get a free quote or to visit our workshop and showroom.