Heritage Windows through the Ages

The style and design of heritage windows have evolved throughout the ages, often because of changes in the manufacturing process and the ease with which glass could be made, as well as the architectural tastes of the time. Specialist window manufacturers such as Timbawood are able to replicate the designs of heritage windows from any era. 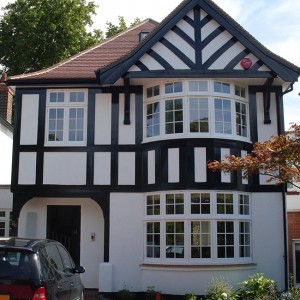 In medieval times, ‘windows’ were often just open holes in the wall, with perhaps some animal skin covering the hole when needed to provide a bit of insulation. Glass was only affordable to the very wealthy, and the Church.

By Tudor times in the Sixteenth Century, glass started to become more available to the middle classes, although because it was hand-blown, only small panes could be made. Windows were typically casement windows made of a series of small panes of glass fused together with lead.

Leaded casement windows can still be seen on many Mock Tudor/ Tudor Revival houses of the late Victorian and Edwardian eras – which gained popularity as part of the Arts and Crafts Movement, a movement which favoured traditional craftsmanship. These decorative houses often feature ‘half timbering’ on the façade, with steeply pitched roofs and decorative chimneys, gables and porches.

Casement windows fell out of favour in the Georgian era, when the symmetry and uniform proportion of sash windows became popular (see right).

By that time it still wasn’t possible to manufacture large panes of glass so sash windows were typically made of several smaller panes in a grid of solid timber glazing bars. In keeping with the understated elegance of the buildings, glazing bars and frames were thinner than they would become in the Victorian era.

Large sash windows became a status symbol for the wealthy classes in the Georgian era because of the window tax, which was in place from the late 1600s until 1851, and meant that the more windows a house had, the more tax the inhabitants had to pay. Some homeowners however, in a bid to pay less tax, bricked up some of their Georgian sash windows.

Windows became cheaper and easier to make in the Victorian era, with the repeal of the window tax in 1851 and the advent of plate glass manufacturing, which meant that panes of glass could be much larger. As a result, many Victorian properties featured large bay windows and sash windows, with fewer glazing bars needed.

Sash windows typically featured thicker sections of timber and also included horns to allow for the larger, heavier panes of glass that had become more typical.

Decorative and traditional styles of architecture, such as Gothic Revival and later the Arts and Crafts Movement, became popular in the Victorian era as a reaction against industrialisation and machine production. Gothic Revival saw the production of arched sash windows and casement windows with delicate arched glazing bars or leading. 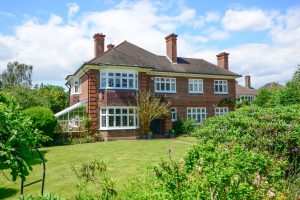 The Edwardian era saw a continuation of this trend towards decorative and romantic features, with delicate leaded windows, oriel windows, gables and even turrets appearing on some red brick domestic architecture. Sash windows and casement windows were more likely to vary in size and shape, with intricate glazing bar designs used for decoration rather than function.

Casement windows came more and more back into fashion with Edwardian architecture and this trend continued into the 1920s and 1930s, when casement windows became the window of choice, as sash windows fell out of fashion.

Are you looking to replace your heritage windows? At Timbawood we specialise in the finest single and double glazed timber sash windows and casement windows for period properties throughout the ages.

We serve London and the Home Counties, with all windows being handmade in our West London workshop. As experts in period, conservation and listed properties we manufacture and install timber casement windows, sash windows, French doors, Front doors, bifold doors and internal doors. We can exact-match your existing windows and doors, carefully matching period mouldings, glazing bars and leading, or create unique designs that are sensitive to the character of your property.

If you have any questions about your heritage project, or you would like a free quote, please get in touch to speak to one of our specialists.